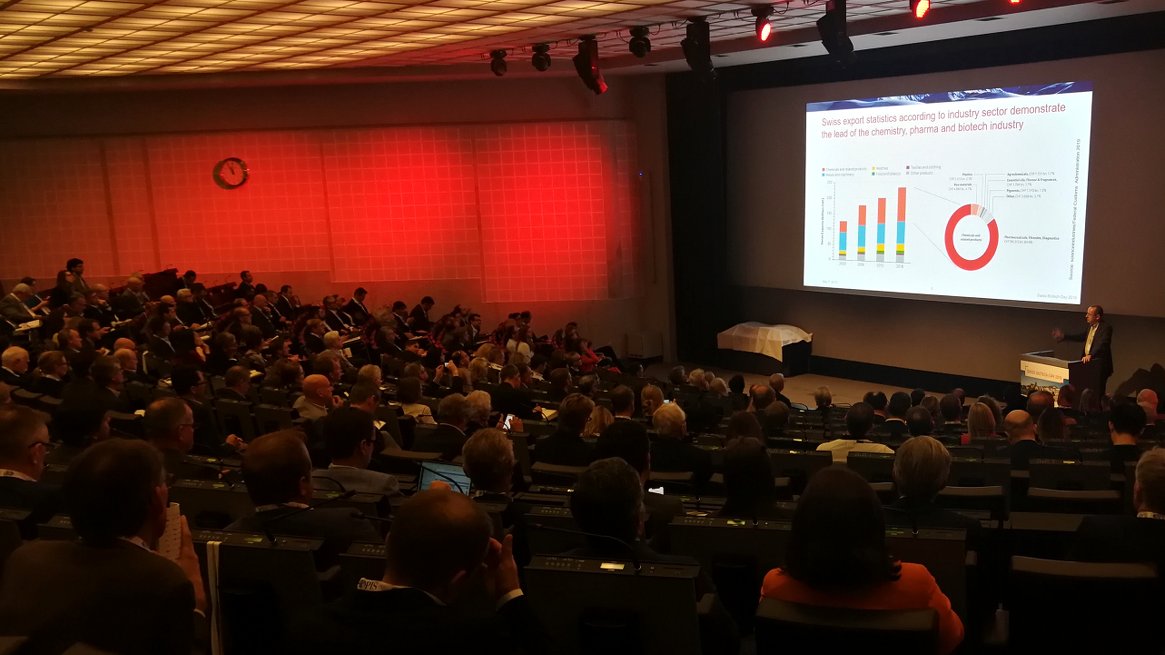 Basel, 10.05.2019 – Although the Swiss biotech sector continues to grow and the annual Swiss Biotech Day is as sought-after as never before, panelists and attendees remain cautious with their predictions. A reoccurring theme at the event in Basel was the plea for change.

Setting the tone: successful entrepreneur Jean-Paul Clozel (Idorsia, formerly Actelion) warned of taking upcoming threats like populism too lightly. Finding the right people is already a challenge for biotech companies now. But this will become worse if a hostile environment scares off experts from abroad. In his panel talk, Clozel also mentioned reimbursement issues and short-sighted investor thinking as major threats to the growing Swiss biotech industry.

All in all, the mood at this year’s Swiss Biotech Day was excellent. With 850 visitors from 25 countries, the event topped last year’s record-breaking meeting (620 visitors from 19 countries) by far. Clearly, the springtime event in Basel has evolved into a must-attend meeting with an appeal that stretches well beyond the borders of the small European country.

According to the Swiss Biotech Report „Shaping Change“ presented at the annual Swiss Biotech Day in Basel for the year 2018, the local biotech industry continues to grow. Compared with 2017, sales increased by 6% to CHF4bn, even though some momentum was lost (growth in 2017: +14%). However, the number of employees in the now 249 biotech companies and 63 supplier companies rose with 4% to 14,300 – a far stronger growth than in 2017 (+2.5%).

Christian Moser of the Swiss Federal Institute of Intellectual Property presented his research on the patent situation. He quantitatively and qualitatively compared the global biotech patents with those filed in Switzerland and found out that “Switzerland is a small but high-quality player in biotech”. Swiss biotech patents account for 1.3% of the global portfolio in terms of patent number and 4% in terms of portfolio value. Swiss inventors have been involved in the initial phase of emerging technologies, such as probiotics, CAR cells (cells engineered to display chimeric antigen receptors), or genome editing (i.e. CRISPR/Cas, TALEN, ZNF).

Using a commercially available software tool based on a so-called Competitive Impact (CI) score, Moser explained that although the percentage of patents filed in Switzerland is getting smaller and smaller, the country excels at filing ‘world-class patents’ (patents with a CI in the top 10% range). Globally, about 16% of all patents fall into this category – and 53% of all Swiss patents. While Switzerland is strong in the red biotech sector (medicine), its patent research points at a potential weakness: white biotech (industrial biotech). “The total number of patents has grown substantially during the past decade,” Moser said. White biotech has caught up with red biotech globally. But this trend is not detectable at all in the Swiss industrial biotech portfolio, which according to Moser has neither grown in size nor changed in proportions during the past decade.

Based on european-biotechnology.com news story